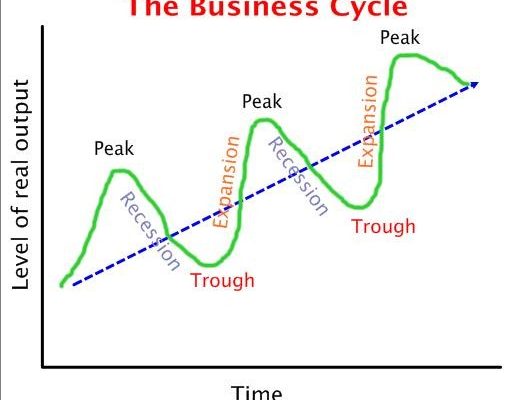 The business cycle affects everyone, from the busy banker to a simple utility worker. These two words mean a lot in daily broadsheets because the effects can be tremendous enough to shake the entire stock market and bring people out of job. What actually is a business cycle and how does it work? If it is a cycle, can it be predicted? What are the important characteristics we should know about? 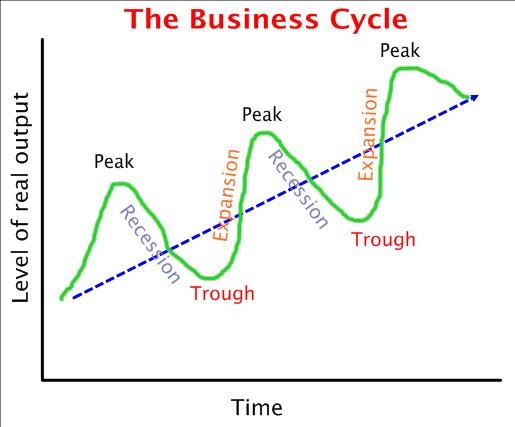 A business cycle is the term for the recurring fluctuations in economic activity. The cycle is comprised of five stages: recession or period of contraction, episode of trough, recovery, economic expansion or growth, and a period of peak. Recession happens when the economy starts to slow down. When the slowing down hits a bottom level, that is called a trough, after which a period of recovery follows. The growth or expansion period happens when the economy starts to pick up again until it reaches a peak or when the economy reaches a state of unreasonable exuberance.

But how do you determine where the economy is within the cycle? The National Bureau of Economic Research (NBER) is the official entity which determines the business cycle phases. The unit tasked to do this is the Business Cycle Dating Committee which utilizes quarterly GDP growth data as the main indicator of fluctuations. Other data being used are real personal income, employment, retails sales, and industrial production.

Business cycles nowadays are less predictable and widely irregular. They vary in magnitude, duration, and frequency. Since the 1940s, a business cycle usually lasted 3 to 5 years in between peaks. The growth period took 44.8 months on the average while a recession took about 11 months. In comparison, the period of economic contraction during the Great Depression lasted for over 3 and half years.

Stages of a Business Cycle

As with everything else in this world, business, too, has its own stages to follow. Take note, for at any point in time, you may be in any one of the following:

This stage is where a slowdown in GDP growth is observed. The growth rate goes down to 1 to 2 percent and eventually turns into negative growth, hence, a contraction of the national output. The recession in 2008 was a cruel one where GDP immediately contracted by 1.8 percent during the first quarter, had a very minimal growth of 1.3 on the second, but fell consistently in all the quarters that followed up to the first quarter of 2009.

The trough stage takes place when the economy is turning a corner, with the growth rate still being negative, just not as bad as before. Based on NBER record, the trough phase for the 2008 crisis occurred during the second quarter of 2009 when the U.S. national output shrank by only 0.7 percent.

The expansion stage refers to that period of positive GDP growth after the economic contraction. During the recent crisis, this phase started in the third quarter of 2009 when the national output managed to grow by 1.6 percent. This was a result of the stimulus spending of the U.S. government. The expansion phase continues until today. In this part of the business cycle, a healthy GDP growth rate should be in the range of 2 to 3 percent. It is said that because of the nasty contraction phase in 2008, the economic expansion has been slow in generating jobs.

The peak phase refers to the period when the healthy economic growth starts to slow down. It is typically the last positive growth before a contraction starts again. It is not easy to predict when the economic expansion is likely to peak, but you have to be wary if the economy grows by 4 percent or higher as the peak can be just around the corner. In the 2008 crisis, the peak transpired during the fourth quarter of 2007.

What are the causes?

Even with the presence of policies that aim to make the economy grow fast enough to generate jobs for people who need them direly (but not too fast to drive inflation up), there are still a lot of factors that can cause an economy to crumble. One very critical factor that can influence the business cycle is the confidence of investors and consumers, and of business people and politicians. It is the confidence of consumers that can increase the demand for goods and services. Once the demand rises, business establishments consequently hire new people to work, and as more people get jobs, this further stimulates greater demand. When this is sustained, the economy can expand.

When the demand rises above supply, the economy can reach a point of saturation. Unless the rising demand is balanced out by higher taxes or interest rates, then the peak of the expansion cannot be that far. As the growth peaks, contraction can start. In this phase, people tend to panic and lose confidence. A deflation happens when asset prices collapse, as was the case in the 2008 crisis particularly the housing sector. When customers stop buying for fear that they may lose their job anytime soon, businesses are adversely affected and they may lay off workers. The lack of jobs can further cause fear among consumers, leading to even greater shrinking of the economy. To spur economic growth, the Federal Reserve lowers the rates of interest.

The availability of capital also affects the business cycle. When there is too much capital in the economy, a healthy growth can turn into a peak which can drive up inflation. To avoid a peak, the Federal Reserve can intervene by influencing a rise in interest rates.

The business cycle is a fact of life. For the government, it is very important to monitor this cycle so that proper interventions can be made. For you and everyone else, the business cycle teaches a lesson that the economy is not in a static state, and that things always have the proclivity to change. It is, therefore, very important for you to make smart choices with how you handle assets and resources, so that there is enough to cover for your needs when the economic conditions become flimsy.

How Does the Business Cycle Apply to You?

Knowing the business cycle can be very important to your buying, investing, and business decisions.  For instance, during contraction, businesses aren’t doing as well so the stock market may not be doing as well, and  interest rates are lower in order to stir business and consumer activity.  Thus in a contraction, it may be wise to get refinance because interest rates are low.  Similarly, during the expansions, it may be wise to start a business or stock up inventory if you already have a business as people are more willing to spend money.  All in all, the business cycle is something natural in a free market economy.  Predict and adjust to the fluctuations of the business cycle will do you a lot of good.