Inflation affects people from all walks of life–quite significantly that even your entire retirement fund can suffer if there is an unprecedented rise in inflation rate. Inflation shows how the value of money decreases over time. While it is often seen as economic, it can in fact be as real as the size of a hamburger that you eat for lunch. Read on to learn more about this very important concept.

Inflation is referred to as the persistent rise in the general level of prices of various goods and services. It is expressed as a percentage increase in annual terms. For example, a 3 percent inflation rate means that the prices today are generally higher by 3 percent from the same period a year ago. As this rate rises, each dollar you have can buy a relatively smaller portion of a product of service. In the economics language, inflation lowers a dollar’s purchasing power. As long as there is inflation, the value of your money will always change.  The chart below shows inflation over the years in the US and the major events that coincided with the periods of high inflation: 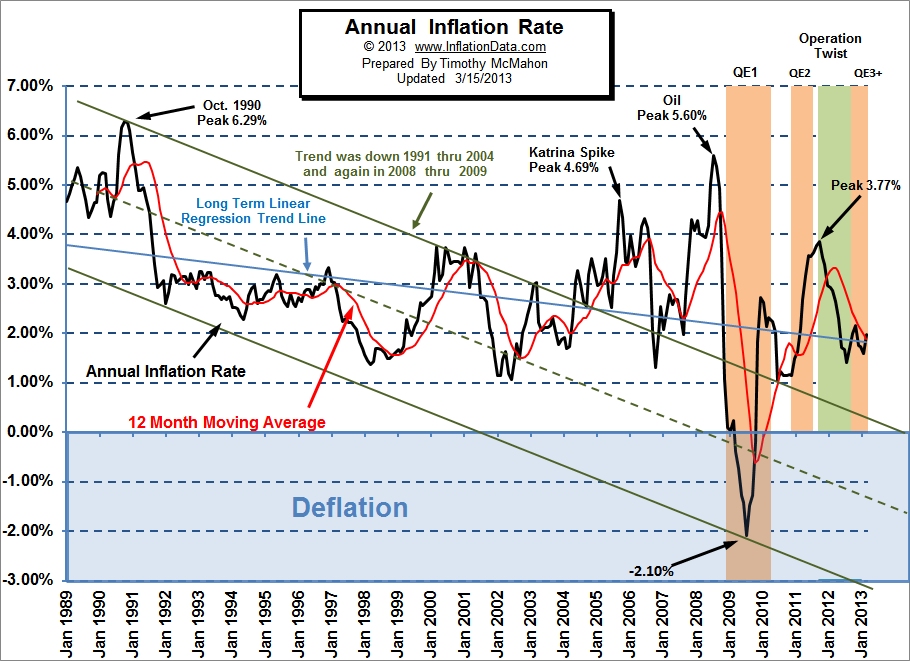 The Several Variants of Inflation

Inflation has several variants depending on the direction of the price changes and the degree of increases. One of these is deflation, which is characterized by the dwindling of prices. Deflation is simply the opposite of inflation. If people worry about inflation, they should do too with the opposite because the economy would suffer.  One of the reasons is the so-called deflationary trap. This happens because as prices fall, people tend to hold on to their cash. Remember that with falling prices, the value of money becomes higher in the future, and people borrow money less often. Deflation depresses an already bad economy. It deters people from spending more and the economy from generating profits and continue hiring workers.

There is also a condition called stagflation, which is a period of high inflation coupled with economic stagnation and high unemployment. Industrialized countries experienced stagflation during the 1970s when oil prices rose amidst a bad economic condition.

Despite the disadvantages of inflation, there is such a thing as a healthy dose of price increases. Having a low inflation rate is preferred over no inflation at all. At a low level, you would expect that interest rate remains positive, and therefore, you would be better off saving or investing your money rather than just leaving it somewhere in your house. This is beneficial to the economy than if there is no incentive to invest, since at zero inflation, the value of your money is constant. Having a positive inflation rate is also better for achieving greater flexibility in the labor market. In fact, many developed countries have tried to sustain 2 to 3 percent average rate of inflation in recent years.

The Downside of Inflation

You have learned that inflation itself is not the problem. It becomes one when it happens unexpectedly such that people have no time to prepare. If people can only anticipate the rise in prices, they can negotiate labor contracts, so that wages can automatically adjust to it. Meanwhile, banks can modify interest rates. In the event of an unexpected rise in prices, debtors gain and creditors are disadvantaged because the increase in prices was not incorporated in the interest rates. This would be tantamount to a loan that has been extended interest-free. The atmosphere of uncertainty will make both consumers and producers (i.e. the corporations) less likely to spend, which has a negative impact on the economy.

Moreover, retirees who are living on a fixed income will definitely suffer a declining purchasing power and this will adversely affect their well-being. There would be re-pricing costs (this refers to the additional burden of updating price labels and menus). Domestic producers will also become less competitive due to the relatively higher prices of domestic goods compared to imported products.

There are a couple of theories about the causes of inflation put forward by economists. When the demand grows fast, that supply could not keep up, and prices will rise consequently. Such will yield a so-called demand-pull inflation, which usually happens in economies that are growing fast. In this case, too few goods and services are said to be chased by too much money.

The other condition is when companies encounter higher costs in their business operations brought about by rising taxes, wages, and costs of imports. They would need to increase prices so that they can maintain their profit margins. This condition leads to what is known as cost-push inflation.

How is inflation measured?

There are different metrics to measure various aspects of inflation. The most common is the consumer price index (CPI). CPI is used to evaluate the inflation that consumers face in their daily living expenses. This is used when devising an approach to adjust payments to consumers if the goal is to allow consumers’ purchasing power to keep up with the present level of prices. Meanwhile, the Producer Price Index is used to measure inflation in the process of production. Inflation in the labor market is measured by the Employment Cost Index. To measure inflation faced by consumers, governments, and other entities that provide goods and services, there is the GDP Deflator which can be used.

What is the CPI?

The CPI is an index of prices that is used to determine general level of inflation. A CPI of 126 means that prices have increased by 26 percent compared to the prices in the base period. The rate of 26 percent refers to the inflation rate. You would normally see CPI with a term next to it that would specify a certain year equated to 100. That particular year refers to the base year with which comparison can be made. The base period can also be a certain month.  If you are interested to get the inflation rate between two periods and not in relation to the base year simply get the difference between the current period and previous period CPI and divide this by the previous period CPI. To illustrate, if the CPI for January 2013 is 180 and the CPI for January 2012 is 150, then inflation rate from January 2012 to January 2013 is 20 percent.

Real price refers to price that has been adjusted for inflation. This price cannot be observed in the market but only calculated. On the other hand, nominal prices are those that you observe in the market and are not adjusted for inflation. It’s what you actually pay for the good and services you purchase. To get the real price of a product given the rate of inflation, the formula is nominal price divided by the sum of 1 and the inflation rate expressed in ratio. For instance, if the price of corn in the country was $2 per kilogram in February 2010 and $3 in February 2012, the real price of corn in 2012 at a prevailing inflation rate of 5 percent with respect to the base year is $2.86, assuming that the base year is 2010.

When comparing prices of a particular good across various periods, real prices should be used because these are more accurate indicator of values in real terms than nominal prices. Real prices have removed the variation that is attributed to inflation and whatever is left reflects the true movements in the price of a particular good.

Let us take for example a one-year bond issued to you at a face value of $100. After a year, the bond price goes up to $110, and assuming you use the nominal value concept, you get a 10 percent interest rate on your investment. However, if you control the inflation rate of 5 percent, for instance, what you have actually earned in interest is only 5 percent.  Even if you have earned 10 percent, if in reality you are spending more because of the relatively higher price levels, you actually get less in real terms.  If for instance after a year you got only $105, then buying the bond did not do you any good because everything got eaten up by inflation.

The concept of inflation and real values are very useful in making a lot of decisions such as those in terms of compensation, retirement, and investments. At a low inflation regime, an investor would expect a higher return to his investment but under very high rates and, with all other things held constant, the earnings can easily be washed out. However, even if people complain about high inflation, they should understand that zero inflation is just as bad as having a very high inflation rate.

People should not worry about rising prices per se, but whether or not these are rising faster than wage rates. Also, inflation is a manifestation of a growing economy. The lack of it can actually indicate a weakening one.