Physics can be an exciting course, mainly because serves as a passport into a vast range of careers in science, education, and engineering.  Not only do physicists work on theoretical and conceptual problems that define humanity, the field provides the conceptual framework for other professions, since it focuses on the very components of physical reality.

What is the Typical Physicist Salary? 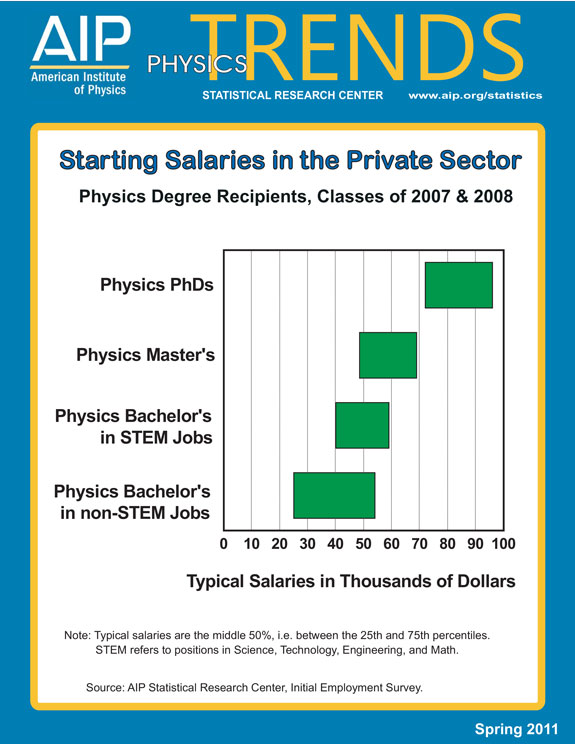 The statistics are from 2007-2008 but you can see the general trend—you get paid more the more education you have.

Here is a good flowchart that shows the opportunities provided with certain levels of education for physics majors: 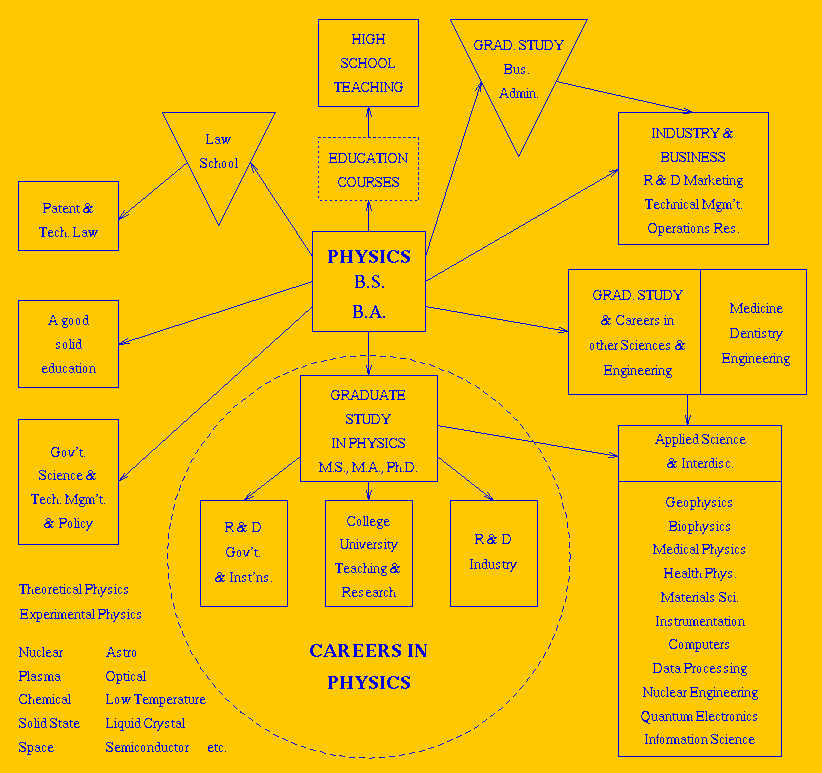 If you want a job with an actual title of “physicist” with your degree, you will most likely have to obtain a higher degree, like a PhD in the field.  Being a physicist is not something you should be doing if you want to be rich; most of the returns comes from the inherent reward of working on the forefront of the field.  The list below will require a PhD in order to do, besides the last one, being a teacher.

Physics majors can work as laboratory professionals. In such setting, a physicist can be tasked to smash atomic particles or design computer chips. He can be instructed to create diagnostic equipment for medical purposes or invent more fuel-efficient vehicles. Since a physicist can work in any type of industry, the things he can invent in a laboratory is also limitless.

As a lab physicist, you will probably work with a lot of labs that are directly related to major research universities, or for the universities themselves. 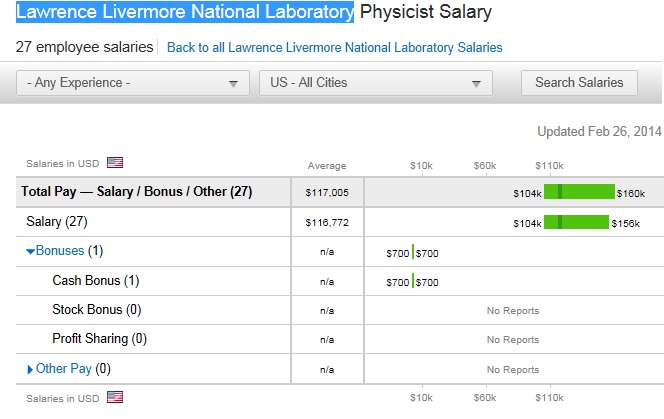 If you are lucky enough to work for the NASA Jet Propulsion lab as a laboratory physicist, you will probably get paid around the same salary .  Here is a look at how much a laboratory physicist at the NASA Jet Propulsion lab gets paid, courtesy of Glassdoor.  Keep in mind, there are only two reported salaries so the numbers can vary with more salaries reported. 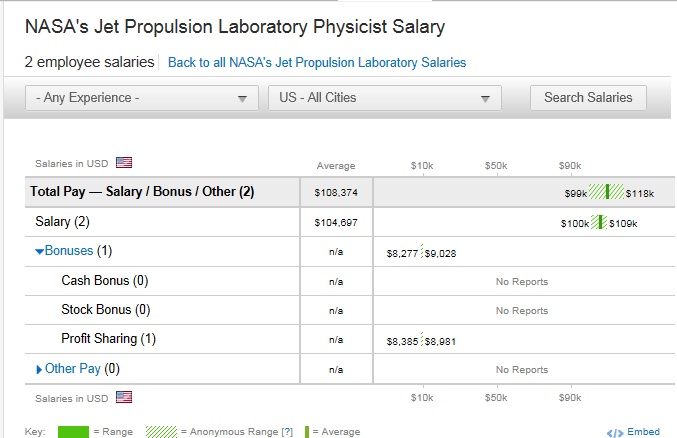 A physics graduate can also be employed by a government agency or a private company to conduct research and development on a variety of subjects. An R&D physicist lays the groundwork and schematics for these inventions, creates new discoveries, thus increasing humankind’s knowledge on various disciplines.  Again, to be an R&D physicist, you will need a PhD in physics.  If you want to make a lot of money working as an R&D physicist, you should go in the private sector.  But some government research and development projects are at the forefront of mankind.

A medical physicist’s job is mainly to improve healthcare by inventing new diagnostic or treatment tools, such as a more advanced PET scan or more sophisticated therapy treatment options for cancer patients. His tasks also include refining existing technologies such as the X-ray, CT scan and MRI, to name a few.  And as you may have guessed, you will need a PhD.

It is among a nuclear physicist’s tasks to study atomic behavior, components, and structure. This profession involves the production and development of nuclear energy and nuclear medicine.  Yup, PhD also required.

A geophysicist utilizes theories and measurements to discover earth properties. He works by conducting researches and performing computations that are crucial in the construction of infrastructures like bridges and highways. Geophysicists can further specialize in the sub-disciplines of seismology, hydrology, geothermometry, and geodesy.  Yes, PhD required.

Do you want to work for NASA? If you are a physics graduate, then you can also seek employment as an astronomer or astrophysicist and realize this dream. The job of an astronomer or astrophysicist entails collecting data regarding stars, planets, and other celestial bodies and phenomena. You are also responsible for exploring new technologies on space flight and satellite communications.  Yeah, you will need that PhD.

Jobs That Do Not Require a PhD in Physics

A bachelor’s degree in physics will offer almost unlimited possibilities for employment. The cool thing about having a physics degree is that it shows that you have a strong quantitative and analytical framework that can be applied to many jobs and many fields. So in conclusion, a bachelor’s degree in physics will offer many opportunities to work in fields related to science, technology, engineering, and math (STEM).  However, with that said, here are a few jobs that physics majors sometimes go into.

A degree in physics can also land you in a classroom setting where you will be working as either a teacher or a teaching assistant. However, if you want to become a full-time professor and be able to teach physics to students in the tertiary level, you need to pursue higher studies (Masters or Doctorate).

A physicist’s analytical approach to problems, versatility, and knowledge on other branches of science can serve him well not only if he decides to be a professional physicist but also if he pursues a career in a different field as well. For instance, there are high schools that cannot afford to hire a physicist only. They would prefer someone who is flexible enough to teach other subjects like biology, general science, and mathematics. So if you desire to seek employment as a teacher, your knowledge on these subjects can give you an edge over the other applicants.

If you want to be involved in crime-fighting, forensic science may be for you.  As a forensic scientist, you will apply your physics knowledge to find out how crimes are committed.

Many physics students have gone onto do management or business consulting.  Although unrelated at first, many of the skills required to study physics are the same skills that are required to do well as a consultant.

Firms Hiring People with a Bachelor’s in Physics

To find out more about statistics of a physics major, go to http://www.aps.org/careers/statistics/

What Can You Do With a Degree in Business Administration?

Business administration is a branch of study that focuses on commercial functions of businesses. It has…

What Can You Do with a Degree in Chemistry?

Chemistry is simply defined as the branch of science that deals with atoms and molecules, the…

What Can You Do with a Degree in Health Informatics and Information Management?

Health informatics and information management (HIIM) is a fast-growing field in the health care industry. It…