[wp_ad_camp_1]
In difficult economic times, when huge businesses that were deemed too big to fail come crumbling down, there are in fact many ventures that can thrive and prosper. Many even take this opportunity to launch their businesses.  Here are ten popular industries that not only survive during recessions and bad economies, but also tend to thrive and do better.

Pawnshops and thrift shops are very popular among the unemployed and those whose income have been significantly affected by the recession. The economic difficulties have led to a broadened customer bases for this kind of businesses. Likewise, more people are now hooked on used merchandise stores. A survey conducted by National Association for Resale & Thrift Shops has reported that sales for instance in the last quarter of 2009 went up 71.4 percent compared to that of the same period in 2008. The number of such stores also grew and by 2010, there were already more than 30,000 resale shops in the US. Customers have changed their shopping behavior; they now tend to go for alternatives with higher value. The thrift shops have capitalized on this and now they are making money.

As more people face immense challenges to make ends meet in such difficult situations, the services of credit counseling firms suddenly become very important. These businesses are getting more clients because people now want to be more in control of their finances. In a report on the credit counselors, surveyors, and appraisers industry, its growth would not have been positive during the recession if not for the upsurge in the credit counseling segment.

The economic downturn has left many people face home foreclosures. Millions of individuals and families have looked and availed for foreclosure-prevention counseling. Reports show that those specializing in this business have enjoyed record volume during the recession.

READ  Why Do Recessions Happen?

4) Automotive Mechanics and Other Repair Businesses

[wp_ad_camp_2]
With a recession, people tend to hold on to their assets more like cars and major appliances. That is why they would choose to have things repaired; this is way more practical than to buy new ones. Auto mechanic, home maintenance shops, and other repair shops also have an edge. Even the shoe repairman across the street is having a good business during a recession.

Economic recession harbors fear among many because high unemployment which is prevalent during a recession is associated with higher incidence of crimes. That is why people become more protective of their properties; they tend to buy home safes, burglar alarm systems, and other security-boosting products thereby creating an avenue for security-related businesses to come in.

The truth is – people drink even when they are broke. So, liquor stores are actually benefiting from the recession. A report shows that liquor sales in the US jumped over 9 percent when the unemployment went up to 9.6 percent in 2010. As people tend to cut on costs, they buy liquor and drink it at home. It is way cheaper than going to the bar!

A 2009 survey shows that a huge percentage of small business owners relied on accountant services for advice on how to go about their business during times of economic uncertainties. Therefore, accounting firms have the edge in time of economic woes.

Many people choose to buy food and other items in bulk when the economy is tough. They purchase sugar, flour, and laundry detergent, among other products, which can be used on a long term basis. Bulk sales businesses (such as Costco) do rather well in uncertain economic times.  During the height of the credit crunch, Costco (COST) stock, like many other stocks, plummeted.  However, the stock recovered quickly to even higher levels than it was before the credit crisis.  At the end of 2010, Costco’s stock price was at over $73, higher than it has ever been.

[wp_ad_camp_3]
As people are laid off, more of them turn to recruiters and temp agencies to find work.  The Bureau of Labor Statistics indicated that this industry grew a whooping 45 percent from 2007 until 2009.  And from the end of 2009 until the end of 2011, the temporary help services industry grew an astonishing 24%.  No other industry grew that fast, not even technical fields like computer programming.

Although retailers in general do horrible in down economies, discount retailers on the other hand survive just fine.  As a matter of fact, during the height of the credit crisis, Marshall’s, TJ Maxx, KMart, and Kohl’s all had gains in December of 2008, while their fellow brethren experienced excruciating losses to their bottom lines.  Here is a chart of each of the company’s growth from December 2007 through December 2008, courtesy of Seeking Alpha: 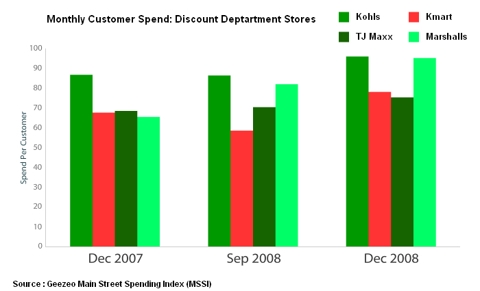 As you can see, economic slumps may be hurting or posing immense challenges to many businesses. But for some, it creates a huge door of opportunity where their businesses can take off and prosper.  So a recession doesn’t necessarily mean bad news for everyone.